Watch The Acrobats Of The Ocean Flip Twist Jump
Advertisement 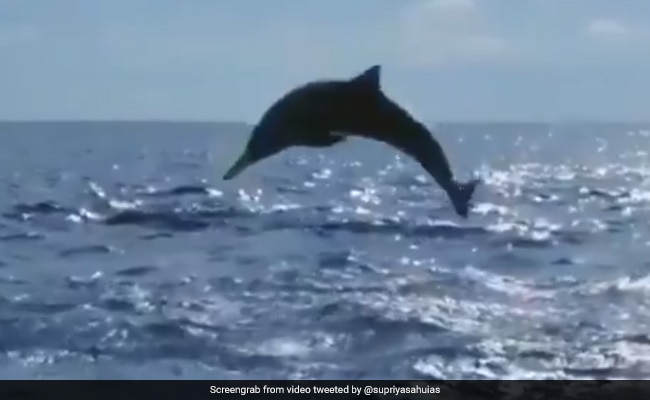 World Oceans Day 2021 Images: Dolphins in the oceans love to jump and flip in the air

On World Oceans Day, stunning images and videos of marine life have lit up Twitter. A video of a pair of dolphins tell us why these aquatic mammals are often called the acrobats of the ocean. In the captivating video, the dolphins jump, flip, twist and do a triple summersault in the air. “Dolphins spin and dive in incredibly beautiful blue oceans, which provide life and refuge to millions of living beings including humans. Happy World Oceans Day. Let’s stop and undo all the damage we have done to oceans,” Supriya Sahu, Principal Secretary Environment and Forests, Tamil Nadu tweeted today.

Dolphins who perform these acrobatics are known as Spinner dolphins. They earned their name because of their “ability to spin multiple times in one jump,” according to the National Wildlife Federation. Conservationists who study dolphins believe these aquatic mammals “spin for several reasons, including communication, removing parasites, and simply for the fun of it.”

Dolphins spin and dive in incredibly beautiful blue oceans which provide life and refuge to millions of living beings including humans. Happy world Oceans day. Let’s stop and undo all the damage we have done to Oceans . #WorldOceansDay#WorldOceansDay2021pic.twitter.com/MygPOUDAW4

These dolphins prefer the warm ocean waters around the world – the Thailand coast, the Pacific Ocean coast of Central America and around the Hawaiian Islands. Dolphins move in groups called schools and they are seen with other species like the humpback whales and tunas. This is one of the reasons they get trapped in fishing nets, according to experts. Many tuna fishing companies are now using fishing methods that help release the dolphins if they get caught.

The most serious threat to marine life – like the dolphins, whales and porpoises – are plastic pollution in marine debris and industrial toxic waste. Noise pollution created by bigger boats also harm them. Dolphins are cetaceans, an aquatic group of mammals who are intelligent, air breathing and can communicate.

UP Announces Relaxations In Covid Curfew Across State. Conditions Apply