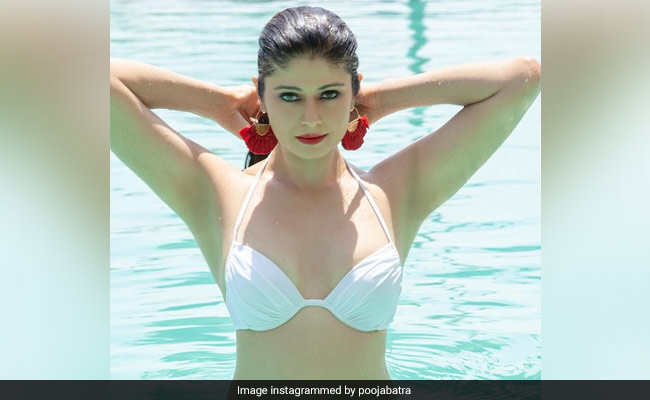 For actress Pooja Batra, who is 44, age is just a number and she still feels like she’s in her 20s. Proof? Her latest entry on Instagram. On Tuesday, Pooja Batra picked two throwback photos of herself chilling in a pool in a white bikini and shared them on her Instagram profile. In the pictures, the actress looks breathtakingly beautiful. She completed her look with red round tassel earrings. In case you didn’t know, these photos were clicked in 2019, going by Pooja Batra’s Instagram feed (but more on that later). Sharing the old pictures on Tuesday, Pooja wrote: “It’s great to be in your 40’s” and added the hashtag #40isthenew20.

So, like we said above, Pooja Batra had shared a similar picture of herself in July 2019. She can be seen performing aqua yoga in a pool in that photo. “‘Yoga does not change the way we see things. It transforms the person who sees.’ – B.K.S. Iyengar. One of the many important benefits yoga offers is that it can help us reset an overworked nervous system stuck in a stress-induced fight-or-flight mode,” her caption read.

The next month, the actress posted another stunning picture of herself from the same photoshoot. Here’s the post we are talking about:

Pooja Batra made her debut in Bollywood with the 1997 film Virasat, in which she co-starred with Anil Kapoor and Tabu. She has featured in several Hindi, Telugu and Tamil films like Sisindri, Vishwavidhaata, Saazish, Haseena Maan Jaayegi, Kandukondain Kandukondain, Kuch Khatti Kuch Meethi, Nayak: The Real Hero and Hum Tum Shabana among many others. Her last Bollywood film remains the 2017 psychological thriller Mirror Game.

Chhanar Bora Recipe: You Have To Try These Crispy-Soft Bengali-Style Chhena Pakora